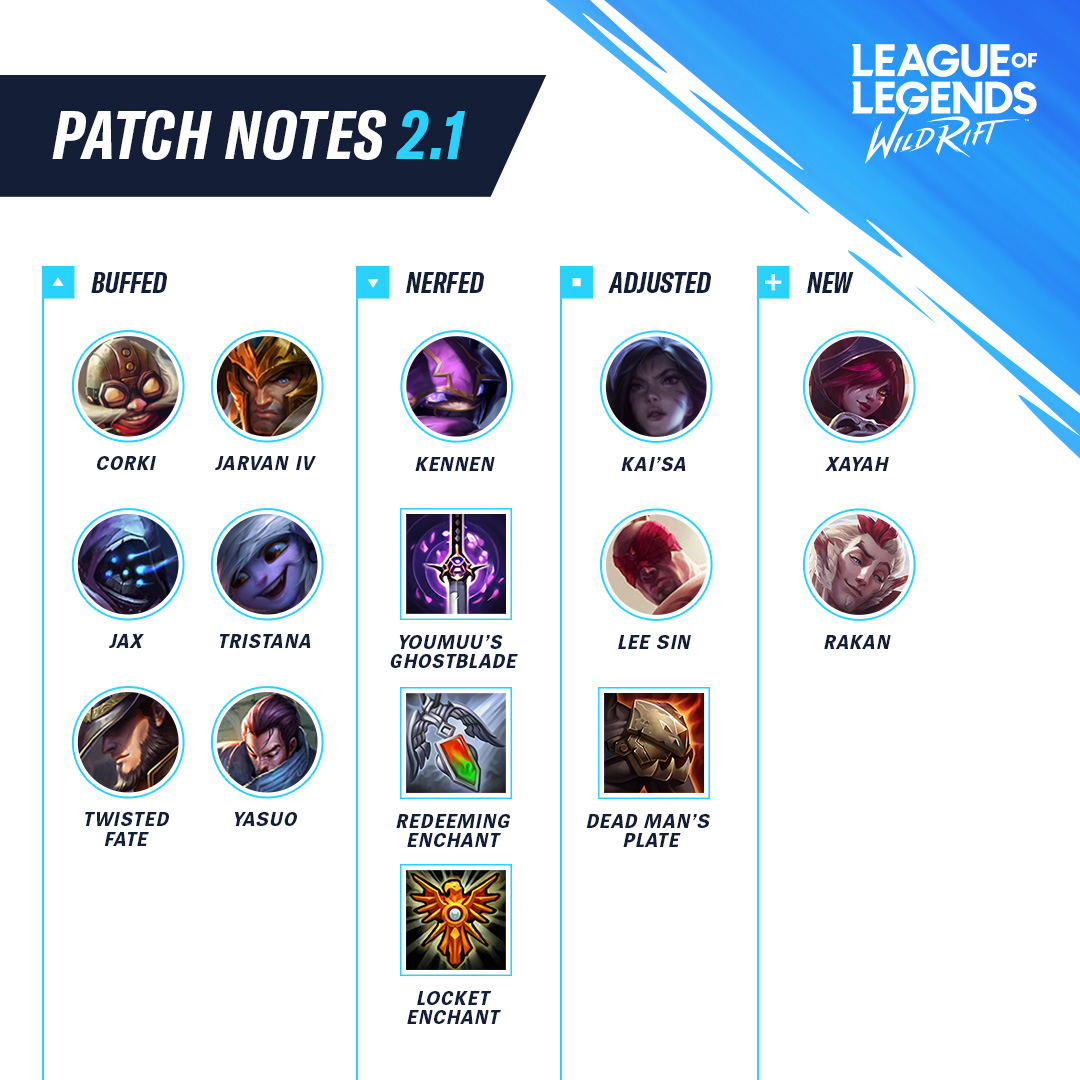 Patch 2.1 brings exciting and refreshing new updates to the game! We are giving you a rundown on what has changed! Read the official Patch notes on wildrift.leagueoflegends.com.

Although not being released with the patch itself, Xayah and Rakan will be coming as a part of the patch cycle. Rakan is a high mobility support with a lot of CC in his kit, while Xayah is an absolutely terrifying marksman who has high DPS, self-peel and CC.

Replays and spectator mode are out. You can now watch your friends feeding live, or watch yourself feeding even days after the game has been played out!

Corki's AD ratio on his first ability was buffed, as well as armor and magic resist reduction on his 3rd ability. His ultimate is now on steroids having it's AD ratio and and base damage buffed. We expect him to have much visibility during this patch.

Jarvan IV has been the target of many memes in the past. We finally get some buffs for our favorite Demacian jungler. His AD per level has been buffed and his passive now deals minimum damage. The hitbox size of his 2nd ability as well as the dash been on his ultimate have been increased and we are curious if J4 will be a solid jungle contender now.

Our favorite 6-eyed frog received some love! His buffs revolve around his Leap Strike, his first ability. With increased range, decreased cooldown across all ranks and a small damage buff he is expected to have a little bit more agency on the Wild Rift.

Kai'sas second ability did apparently not apply her passive correctly which has been fixed.

Kennen has received a hard hit with the nerf-hammer nerfing not only his base stats, but almost every single ability of his kit. His ultimate has now a lower AP ratio as well as a lower base damage.

The little Yordle marksman was very lackluster on her release, so she got a little help in form of buffs. The attack speed and duration of her first ability have been increased. Rocket Jump, her second ability deals now slightly higher damage and the damage and AD ratio of her third ability has been greatly increased.

Yasuos late game damage has been buffed and his ultimate animation duration has been decreased. Yasuo buffs always let our alarm bells ring, and we hope to get bans soon, so we never have to see a Yasuo on the enemy, but most importantly on our own team!

Several items have been changed, and we got some new events and skins. In order to check out what it's about exactly check the official patch notes at

We are currently in the process of reflecting all the in-game changes on our tooltips and then releasing patch 2.1. Please adjust your guides accordingly to the new patch, as soon as it's rolled out!

Lunatic
Developer/Admin
Lunatic founded wildriftguides.gg in 2020 shortly after LoL: Wild Rift was released and has been a filthy Nasus main ever since, stirring up the rift with raw bonks!